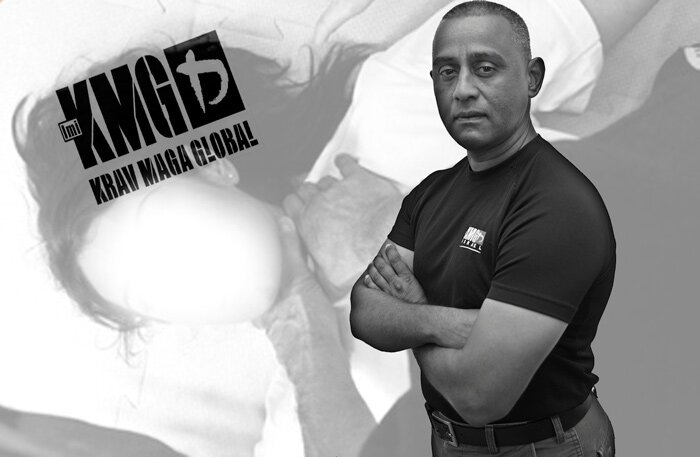 “Your mind is the most valuable tool you have in any confrontation… as long as you’re still alive you’re a winner… don’t give up on you… you owe it to yourself to fight to stay alive!” – Major Sarwan Boodram

You’re walking to your car in the parking lot at your office, when someone grabs you and you are flung into the trunk of a vehicle…

You are knocked to the floor suddenly, with your attacker straddling your stomach and his hands closing around your neck…

You hop into a taxi late at night, and the ‘passenger’ beside you shoves a knife to your ribs…

You’re at a mall, surrounded by throngs of Christmas Eve last-minute shoppers, when you hear a gunshot…

Thankfully, unless you’re the lead character in the Hollywood action film, this isn’t the everyday occurrence — but it could happen. One look at the rising murder toll on the news teaches us that this does happen — and most of us are not prepared for it.

This is the core of the Krav Maga philosophy — being aware of real-world combative situations, and knowing how to counteract it and defend yourself in any situation.

The term ‘Krav Maga’ has been adopted to represent a martial system that began in the 1940s by a Slovakian-Israeli martial artist, and consists of a blend of various techniques sourced from wrestling, boxing, jiu-jitsu, and various realistic ‘street-fighting’ training. Its teachings have now spread throughout the world and have been incorporated in military, police and other defence force training programmes as well as civilian self-defence training.

Grandmaster Sarwan Boodram, who is responsible for bringing Krav Maga to Trinidad and Tobago and the wider Caribbean region, emphasises that its first principle is not aggression but awareness.

“You have to live knowing any moment may be your last… but don’t be paranoid — it’s about being constantly aware and prepared to escalate,” explains Major Boodram.

A Career of Combat Readiness

For Major Boodram, there was no other career path. At the age of seven he began training with his elder brothers and cousins, and soon began his own formal training and became a member of a local martial arts team competing in full contact fighting throughout the region.

Since the start of his professional career in 1980 as a Military Combatives Instructor for recruits in the Trinidad and Tobago Regiment, Major Boodram has been actively involved in the development of training programmes for our national defence forces. He has been crucial in live combat situations including various Special Forces Operations and even the 1990 attemped Coup d’Etat. He is also the first in the Trinidad and Tobago Defence Force to achieve the rank of Grandmaster.

Major Boodram is the founder and director of the Combat Readiness Programme, which represents Eyal Yanilov’s Krav Maga Global of Israel, Jim Wagner’s Reality Based Personal Protection of the USA, Steven Jimerfield’s One on One Control Tactics of the USA and Special Forces Survival Tactics in the Caribbean.

This programme combines Major Boodram’s knowledge and training throughout his career of over thirty years of Army and Law Enforcement experience and training with Elite Units around the world including:

He also holds a Master of Sciences Degree in Security and Risk Management from the School of Criminology at the University of Leicester in the U.K., and a Certificate in Physical Education from the University of the West Indies in Trinidad.

Defending a knife attack from in front

The Combat Readiness Programme is not just for military, police and security forces — its students include a large number of civilian professionals throughout the Caribbean, and even women and children.

As a civilian, particularly as a working professional, we often depend upon weapons such as a firearm, but Major Boodram challenges this belief.

“You learn to shoot standing and aiming at a target,” he explains. “No one is rushing you, there is no stressful situation… and on top of that, you are supposed to keep your firearm locked in a cabinet. In a real-life situation, when you awake disoriented in the middle of the night, you may not be mentally or physically prepared to actually use a firearm. And, if you are disarmed — then what?”

The Combat Readiness Programme was born out a need to expand upon the idea of ‘self-defence courses’, which Major Boodram argues often do not really teach people what they need to know.

“The concept of training is wrong — you learn techniques but no tactics,” he says. “In a real-life situation, it’s not about perfecting a move, but about fighting to stay alive.”

Krav Maga, a key component of the Combat Readiness Programme, teaches pre-emptive and reactive counter-attacking, target attacks to vulnerable parts of the human body, maximum effectiveness to neutralise an opponent, and above all — alertness and awareness of one’s surroundings to seek an escape route or object that could be used for defence.

Teaching the nation to be combat-ready

Major Boodram’s most recent accomplishment, and one he considers to be the culmination of his career, is the authoring of a book entitled Personal Safety, Self-defense and Assault Prevention which was published in March 2013.

The book is the condensation of the principles and concepts of his foundation course in Combat Readiness Level One for civilians and professionals.

It is the only book of its kind ever published by a military officer anywhere in the Caribbean, and for this he was honoured with a first-time author award from NALIS (National Library and Information Systems) for contribution to the area of crime prevention and combat awareness in Trinidad and Tobago.

Major Boodram’s book has now become part of the school curriculum in many secondary schools including ASJA Girls, Lakshmi Girls and Presentation College; and universities including UWI. He is currently in the process of implementing a programme for UTT, as well as one for Arthur Lok Jack specifically targeted for business professionals.

This book has helped bridged the gap in the national mindset that shies away from certain elements of ‘fighting’ as it is believed to be more suited for armed forces than civilians.

As Major Boodram explains, the book is not a ‘karate programme’ but teaches foundation principles, and is written for anyone to understand and be able to apply the teachings to their everyday lives.

Dress to Fight: Self-defence for all

Defending a knife attack from behind

Major Boodram has taken a special interest in developing programmes targeted to women and children, who may be the most vulnerable in a confrontational situation.

Women are often lulled into a false sense of security when there is a male present, and children may assume that an adult can protect them in any situation but this is often not the case, as the assumed ‘protector’ may have never been in a fight or may be unfit to react if heavy physical activity is required in a situation.

“Women dress up and beautify themselve and go to the gym to look good, but who are you looking good for? Your husband and your boyfriend, yes… but the rest of the country is not blind: everyone else is seeing you,” Major emphasises. “And your man will not always be around… or what if the attacker shoots or stabs your man, what do you do?”

Everyone is responsible for his or her own personal safety — a mantra Major repeats consistently.

“You have the right to wear what you want, but whatever you wear, be prepared to fight out of it,” he adds.  “If you’re in high heels, your heel is a weapon. If you’re in a short skirt, don’t be afraid to lift your leg. There is no daintiness when you are fighting for your life.”

Another key target audience is children, which has been a core focus for Major Boodram’s programmes.

“In this day and age of bullying, and violence in schools, children need to be equipped from a very young age to learn how to defend themselves in any situation,” he says. “Sometimes just wearing your school uniform is the equivalent of putting a target on your back for an adult attacker, or an attacker from another school.”

Sometimes, it is just a matter of being assertive — saying ‘NO!’ in a firm voice can shut down a confrontation from the outset — and the first teaching of Combat Readiness is avoidance, not confrontation, as Major Boodram reiterates.

Major Boodram has always been driven by the innate passion for protection — and the staunch belief in the importance of self-empowerment for everyone regardless of gender, career title, or physical stature.

“I saw a lot of violence from my personal experience — not just in the Army but in the everyday walks of life, and developed the Combat Readiness Programme with this in mind,” he says. “We all need to be alert and aware, and ready for whatever may come.”

Major Boodram and his team hold various programmes at locations throughout the counry, and also visit organisations for introductory teachings and self-defence training for professionals. You can reach Major Boodram at 1 (868) 789-9268.

Also be sure to read WellnessConnect’s articles on Major Boodram’s Combat Ready Strategies for Personal Safety and Safety Awareness at Home and at Work.

If you represent a company, visit our "Subscribe" page to sign up for all staff. If you're an individual, just enter your email below!